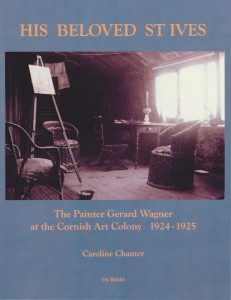 IRIS BOOKS publishes books about the painter Gerard Wagner and his painting legacy, which was inspired by indications given to painters by Rudolf Steiner.

Austin Wormleighton, John Anthony Park’s biographer,
Morning Tide, John Anthony Park and the Painter’s of Light. St Ives 1900-1950
“I do want to congratulate you (again) on the book which I think is a most engaging read, made even better by the sepia photographs. The book looks good and feels well in the hands.”

Christopher Cooper, Waldorf Teacher:
“The text reads well and shows the extent of your painstaking research. It isn’t probably going to make a big impact in today’s world, but I feel that in 30-50-70 years time it will be deeply appreciated as a unique documentation of one of the greatest artists of the 20th century. This first book has given wonderful glimpses of the early years and of the fine individuality of John Park. He really comes to life!

Review by Barbara Bridge, Essayist
This lovely book opens a new and little known window into a young artist’s year in St Ives in the early 20th century, his apprenticeship and sketching tour in France with John Anthony Park, an established English Post-Impressionist.  The books also traces Wagner’s year at the Royal College of Art before his eventual arrival in Dornach, Switzerland.

The book is beautifully produced and presented. The paintings and photographs (works of art in themselves) perfectly complement and enhance the text.

It is marvellous to step back in time in this book and get a sense of the part John Anthony Park played in influencing the art of Gerard Wagner in his formative years.  The sketching tour of France in 1925 gives a unique glimpse of these two artists and reveals the context in which they worked together.

The paintings of this period illustrated in the book, reveal Gerard Wagner’s early feeling for colour and broad-brush technique, taken forward into later dramatic and powerful colour paintings after he settled in Dornach, such as in The Baptism in the Jordan where colour is all embracing.  As illustrated in paintings of later years, Wagner’s work becomes deeply reflective of his inner journey into other worlds, and of his lifelong `search for colour to reveal itself.’

My Beloved St Ives is a delight to read, a book to treasure, to take up from the bookshelf and to conjure the imagination, leaving us with a desire to know and read more.

“I had not realized that you were doing a book on Wagner’s time in St Ives separately to the full biography, but it makes an excellent study and you have a wonderful collection of rare photos.  It was great to see an image of Alfred Hartley and to hear that they met Charlton Fortune in St Tropez.  Might the trip have been for that purpose?  Perhaps Fortune also studied under Park.  It is yet another fascinating St Ives connection.”

Painting with plant-based pigments forms the main part of the training while the study of Rudolf Steiner's lectures on art and colour are the basis for the study periods.
Skip to toolbar